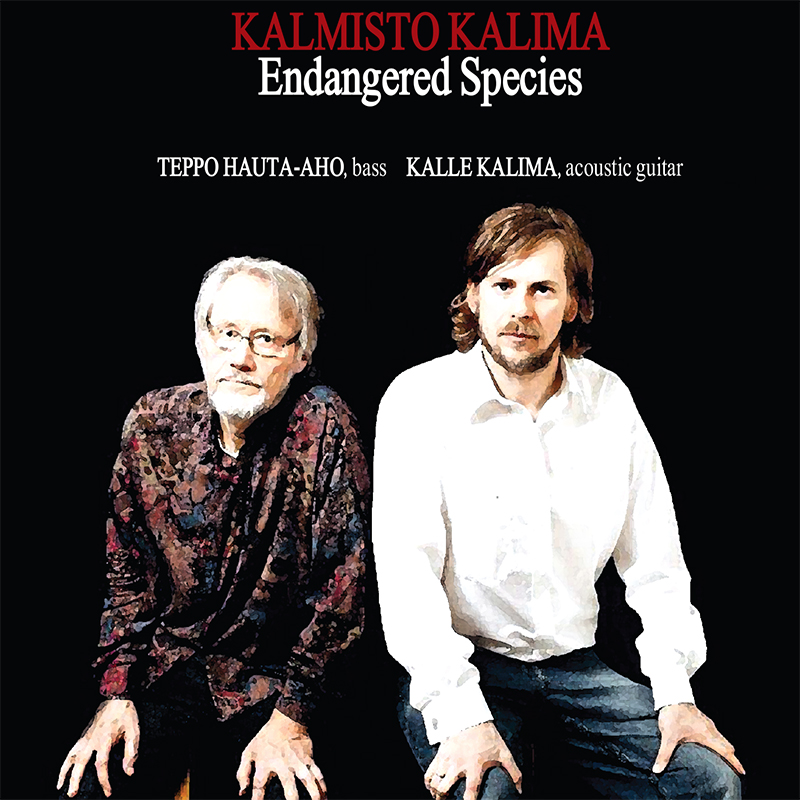 "This recording was made in 2003 in Teppo´s apartment in Helsinki. The atmosphere was cozy and we had great time improvising together. Besides working together in the group "K-18" the duo played concerts around that time and we had a certain language of our own when played in acoustic duo formation. This language can be heard on this album "Endangered Species". Now Teppo is gone and I will miss him greatly as a kind and generous person and wonderful musician. RIP, dear Teppo."
Kalle Kalima

All compositions by Hauta-Aho / Kalima
Cover photo by Maarit Kytöharju

Teppo “Kalmisto” Hauta-Aho (1941-2021) was a double bass virtuoso and new music composer. Over the course of his career Hauta-aho made himself a familiar sight in classical, new music, chamber, jazz and improvisation circles. In 1986 he won the acclaimed Prix Reine Marie-José with his "Fantasy for Trumpet and Orchestra". Teppo was also responsible for the most widely played bass piece by a living composer – his "Cadenza" is a world-wide staple of bass contests and auditions. Hauta-aho had written four internationally recognized classical/improvisation concertos, the purpose of which is to bring musicians from the two camps together. In 2003 he received the Recognition Award from International Society of Bassists for his compositional work. Kalmisto-Kvartetti, Ensemble Braxtonia, Helsinki Express, Quintet Moderne, Trio Nueva Finlandia and the Harri Sjöström Quartet were just some of the national and international groups in which Teppo Hauta-aho performed from the mid-80's. Hauta-aho played with a multitude of the world's best improvisers, such as Alexander von Schlippenbach, Paul Lovens, Mal Waldron, Barre Phillips and Cecil Taylor.

Kalle Kalima (b. 1973 in Helsinki, Finland) has worked with trumpeters Tomasz Stanko and Leo Wadada Smith, sax players Juhani Aaltonen, Anthony Braxton, Harri Sjöström and Frank Gratkowski, bass players Greg Cohen and Sirone, guitarist Marc Ducret, composers Michael Wertmüller and Simon Stockhausen, pianist Jason Moran, drummer Tony Allen and singers Andreas Schaerer, Linda Sharrock as well as with Ensemble Resonanz and Jazzanova Djs. Kalima has cooperated with Knut Reiersrud on guitar, Jim Black on drums and Phil Donkin on bass on “Flying like Eagles”. The group Klima Kalima with Oliver Steidle and Oliver Potratz won "Neuer Deutscher Jazzpreis” in 2008 and has released four albums. Kalima also led K-18, a Finnish group that featured Teppo Hauta-aho on bass, Mikko Innanen on sax and Veli Kujala on accordion, which won Jazz-Emma in Finland in 2013 with their album "Out to Lynch". With his solo program “Pentasonic” he plays guitar through electronics into 5 amps surrounding the audience. He is a member of the group “Kuu” with Christian Lillinger, Jelena Kuljic and Frank Möbus, which claimed positive resonance with their albums “Lampedusa Lullaby” and "Artificial Sheep". He has a trio “Tenors of Kalma” with Jimi Tenor, Finnish underground pop star, and Joonas Riippa on drums. Kalima has been a professor of jazz guitar at the university of Lucerne since 2017.